WILD COASTS - what does it mean?  What came to mind when you saw this in the programme back in January, when I illustrated it with this stamp from 2002 showing the wild coast of Portrush in County Antrim?  Well, it isn't more of the same, at least not for that issue.

And the subject is not one of these either: 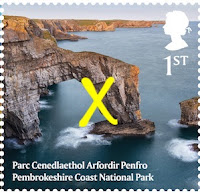 As readers of the Commonwealth Stamps Opinion blog will know, the subject is closer to these - all coastal wildlife, above and under the surface. 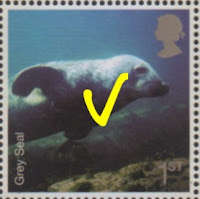 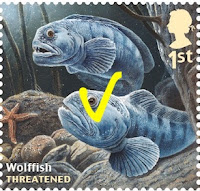 And the stamps - which I am not yet able to show - are already available on eBay, for pre-order.  I suspect this is somebody who works in or owns a franchised sub-post office.  And Royal Mail Stamps & Collectables have no control over them.  (Let's face it RM can't prevent post offices from selling stamps ahead of the issue date as we have seen.)

More details of this set of 10 x 1st class and miniature sheet, issued on 22 July, next week!

Why are these stamps being issued?  According to Royal Mail:

Nowhere in the UK is more than 70 miles from the coast, and our waters team with incredible marine life. This stamp issue celebrates the beautiful and surprising animals of our coastal seas and shores, with the UK waters and British Isles providing unique habitats for a multitude of species.   The 10 stamps celebrating the UK coastline, including wildlife from all over the UK are accompanied by a 4 stamp miniature sheet focussing on the UK’s marine food web.

I've never before heard of the food chains being described as a web, so we all learn.

As usual the self-adhesive retail booklet is printed by ISP Walsall in gravure which makes this two more new stamps, prey and predator, although apart from the gannet and the dolphin these will be most popular with the stamp-using public.

Collectors sheet  The self-adhesive collectors sheet includes the 10 x 1st class stamps from the main set. Each stamp is presented alongside stickers featuring further photographs of the coastal wildlife in their habitats.

UPDATE  27 July:   I have often said that special stamps are available at the majority of post offices in the UK (supposedly approximately 7,500 of 11,500).  I found some postcards that would make good maximum cards, but when I visited Dereham's Crown PO to buy some gannets I was told that this 4-counter position office was only supplied with 100 stamps - not 100 sets, 10 sets!  So I ventured to the village I usually use for posting.

There the stamps (issued Thursday last) had not arrived (although I would have expected them to be delivered 3-4 weeks earlier, and the sub-postmaster told me that as nobody ever asked for special/philatelic stamps and other products he would return them when they did arrive and had asked not to be supplied with any more.

Comment.
There are some attractive designs, but Royal Mail have steered clear of highlighting the problem of foreign matter such as fishing tackle and microplastics in the food chain.  I suppose they wouldn't make attractive stamps but they would certainly be applauded by Greenpeace in their campaign against plastics.  Here's a different gannet from their website.