This will be a short summary of early July news items which don't necessarily warrant a full-blown blog post in their own right.

Royal Mail's on-off relaxation of normal rules for obtaining special postmarks on first day covers and other items, previously mentioned in July and November last year, will come to an end on 31 July 2021.  This means that the 22 July Wild Coasts stamps (about which more later) can be sent until the end of the month, but the 12 August Industrial Revolutions issue will be subject to regular rules as detailed in the Postmark Bulletin.    The usual concessions will apply to those (especially overseas) who do not receive the stamps or blank covers by the date of issue, and for Bulletin late announcements.  Always include a note to the SHC manager if this applies.

And now that we only have one handstamp centre covering the whole country bar London and the Wales and West area, it is even more important to ensure that the instructions in the Bulletin are followed especially regarding having an address on the item to be postmarked and providing a return envelope for covers for each handstamp requested.  (Multiple items can still be enclosed in one larger parcel or box, though.)  Guidance and clarfication from the very helpful people at Tallents House on 0345 071 2000 (os&hs_enquiries@royalmail.com).

Doctor Blade is back!

Ok, it never really went away because it is an integral part of the printing process, but on the Dennis & Gnasher post we have a picture of a booklet with two distinct flaws.

Jim P has sent some pictures of a nice flaw, which I don't think is constant, on the 50p Machin in the McCartney PSB.  I've added it to the Music Giants V post.

According to the July Philatelic Bulletin this set consists of six stamps (2nd class, 1st class & £1.70 in se-tenant pairs), and a miniature sheet (2 x 1st class & one each £1.70 and £2.55 in a block of 4).  As well as the usual products there is a Prestige Stamp Book the definitive pane of which contains 3 x 10p, 2 x 5p, 2 x 20p and a single £1.70.  Now to make this useful to dealers as well as collectors, one of the 10p could have been another £1.70 so providing two sets.  But that would have been an expensive book which is £18.03 already.  Anyway, any collector buying for the new stamps alone (the 10p isn't new unless it's somehow different) will only have 55p-worth of postage - plus the special stamps, of course, which includes two pairs of the sheet-origin 1st class.

More details towards the end of this month.

Two Royal Mail/Royal Mint products have been announced and doubtless they will be on the Royal Mail website ere long.

The second cover marks the 75th anniversary of the death of author H.G.Wells.  The Royal Mint bi-coloured £2 coin has already been criticised for inaccuracies (the tripod creatures have four legs) but it stands (pun itended!) there alongside three of the 1st class Time Machine stamps from Royal Mail's Classic Science Fiction set issued earlier his year.

The stamps are cancelled with a 13 August Bromley handstamp showing Wells' signature.  There are three bi-coloured coins, cupro-nickel at £19.95, sterling silver part plated in gold (£92.50), and yellow gold + red gold (£1,095).  Quantities are the same as the other cover. 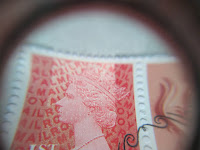 Regular followers of Machin sales on that well-known auction site will have seen a single 1st class stamp from this pane realising £62 - because it was mint.  A reader commented on the original thread that the panes were on sale mint at the Stafford Stamp Show for £18 (two dealers were selling) and I saw them on sale at Midpex last Saturday for £25.  The ultimate folly today saw a German dealer sell a mint pane for £365.99 with the underbidder £10 less.

Collectors in the EU should by now be aware that rules on importation of small-value items changed from 1 July, in much the same way as they changed in the UK from 1 January.  In short this means that business to consumer sendings are now taxable no matter how low the value of the goods.  Royal Mail explain it on their shop website thus:

What does this mean to our Stamp and Collectibles customers?

Any customer that resides within an EU member state and orders any product from the RM Web shop or any other channel that we offer, since 1st January 2021 may have had to pay additional VAT and handling charges to the local post or parcel delivery company before their orders got delivered to them.

Royal Mail is registered for the IOSS (Import One Stop Shop), so from 1st July 2021 whenever the order placed by our customers meets the conditions for using the scheme, Royal Mail pays the VAT due instead of the customer thus ensuring our customers do not have to pay customs charges (although a few of the national posts / parcel operators may charge a very low fee) and suffer potential delays when receiving their goods.

In effect this means that all goods bought from outside the EU are subject to local VAT.  In practice letters containing a few stamps are - as at present - less likely to be examined and charged by local customs authorities who are likely to be concentrating on bigger fry.

For Norvic Philatelics we continue unchanged.  Customs labels will be added to despatches where required (ie not normally for letters or large letters) and customers in the EU will be treated in the same way as those in any country outside the UK.  Local taxes are the responsibility of the customer.

Note that if you (in the EU) buy from UK sellers on eBay, eBay will automatically add your local VAT to the price you pay in most cases.  Collectors in the UK buying from outside the UK on eBay have the same problem.  The one ray of light is that you no longer have to pay the Royal Mail/Border Force £8 examination charge.