Having missed the Stafford Stamp Fair last month, I was pleased to be able to go to the Warwickshire Event Centre, Leamington Spa on Saturday 3 July for Midpex 2021.  For many of us it was the first event apart from a few club events in early 2020 that we had attended since 2019. 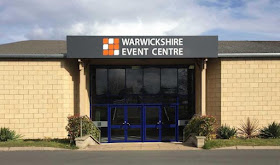 Taken in isolation it was business as usual because Midpex only happens in alternate years so meeting up with members of specialist societies was simply a case of meeting two years on, as normal.  Except, of course, that nothing is normal.

Arriving 15 minutes after opening, I was greeted by a longer queue than is usual because contact details were being taken and checked.  Fortunately those who have the NHS Covid app on their phones were able to bypass this and scan the QR code to record arrival.  There was no temperature scanning.

As is often the case the first table had the programme and floor plan, alongside fair flyers and dealer brochures.  Unfortunately nobody was making sure that the programme was given to everybody, and - partly I suspect because of its Cavendish sponsorship message - it wasn't immediately visible among the already scattered piles of material left by dealers and other fair organisers.

There were slightly fewer dealers and fewer specialist society tables, which meant that there was more space for wandering, and it was easier to see who was where.  It's a pity the floor plan shown on the website isn't the same as on the programme, where it is divided into three images with no indication as to where they adjoin.

Dealers I spoke to later in the day were pleased with how things were going; as one said at lunchtime, "the place is buzzing!".   Depending on their speciality, some were doing an exceptional of business for most of the day, some seemed quieter but that is often the case.

It was very good to be able to meet up with dealers and collector friends who we hadn't met for some time, and in some cases not before.  It's always nice when contributors to this blog make themselves known: sometimes they are lucky enough to get a cup of coffee!

All in all, the Midland Philatelic Federation and the location organisers are to be congratulated on another excellent event.

A major acquisition was a newly published 'Complete Machin Catalogue' - A Specialised Guide.   Read more about this in a separate post.

If you're only interested in mint stamps, there is no need to read any further, although I hope you do because I think postal history can be interesting even to those who don't collect it.

I browsed some GB postal history boxes, and found a few pieces including a run of correspondence from London to Czechoslovakia from just after the war through to the 1980s!

Getting a single high value stamp properly used is always good, even if the registered label has dropped off.  This King George VI 10d issued in 1939 was still in use in December 1953 (the QE2 stamp wasn't issued until February 1954).  It pays the 4d letter rate plus the 6d registration fee.

The 4½d Wilding definitive was issued on 9 February 1959 to pay the 2 ounce (second step) inland letter rate effective from 1957.  But that still wasn't enough for this March 1965 letter which is marked

and has a 3d postage due stamp to cover twice the deficiency.

When registration fees change at different times to letter rates, some interesting and short-term combinations can arise.  This 2/3d registered letter includes the 1/6d and 1d definitives and the 1964 8d Geographical Congress stamp.  There were probably a lot more ways to make up 2/3d (1/6d + 9d being the most obvious in the absence of a 2 shilling stamp).

Collecting stamps is great, as a starter - the interesting task of working out why they were issued and how they were used can be very rewarding as well.